The followup letter from VTK:

hi guys here are some ideas i was thinking of for the game:

it could be interesting if on each level (map), there were a number of items you need to find and collect, and when you collect them all, the round is completed — or more ambitious and expanding on that — there could be a number of set points on the map where the items can be located, and then on map initialisation, the items are placed randomly at some of those points, to avoid players memorising where the items are on each map. eg. on the first map there are 5 items to collect, which can be found at any of eg. 10-20 possible set positions

perhaps another idea is to have each item you collect a certain unique type/shape, and for each item, you need to take it ‘home’ where it is dropped off, and then you head out again to find more parts… and eventually the different parts build a spaceship to escape the map, or, eg. some kind of super weapon (eg. a bomb which you assembled from the parts you collect, used to destroy some kind of eg. reactor on the map somewhere. perhaps when you are heading for the reactor, you no longer have access to any of your weapons due to carrying the ‘superweapon’, so you need to avoid enemy attack/fire as you run and jump your way to the reactor). if there was a reactor to destroy, this could be used as the time limit. if the reactor is not destroyed in the required time limit, perhaps there is a big ‘flash’ on the screen as the player is destroyed by some kind of radiation pulse designed to eradicate ‘hostiles’ (..’hostiles’ being the player!…)

perhaps the player if carrying an item, cannot use his weapons until the item is dropped off at home.. but en route if u are shot/attacked/touched by an enemy, you drop the item, and can use your weapons again, and then when you have removed the current threat, you can pick up the item again and continue to transport it home .. actually, since the vectrex has 4 fire buttons, perhaps one button could be assigned to ‘carry/drop an item’. (note: perhaps enemies, when destroyed, can respawn after some seconds eg. 10 seconds, to keep the gameplay ‘action packed’) ..

it would be exciting to do this under a time limit so you have to keep moving (finding the parts, avoiding or destroying enemies, and then transporting the superweapon once it is assembled) .. or if it is a spaceship we are bulding to escape a map, once escaped there could be a subgame level where you are in the spaceship flying through space heading for the next map, fighting some alien vessels en route. perhaps in the space shooting subgame, there are some ‘time’ icons you can shoot, eg. each one giving you an extra eg. 10 seconds on the following map… also perhaps some various things could be collected in the space shooting subgame, which will help you with the commencing map, but they are not easy to collect, eg. they are placed amongst some asteroids or areas which are tricky to fly through .. do you risk navigating through the dense asteroids to collect the special icon? eg. an icon which if you can collect it means you start the next map with eg. a Laser weapon

the map: perhaps it would be an idea to start off with a limited weapon at first, perhaps something which is short range/close contact, but sometimes on the map bonus weapon icons appear which on collection give you something more powerful, but only temporarily until a timer runs out/or until ammo runs out
eg. the normal starting weapon for each map could be a close contact short range plasma shock weapon .. but find and collect an ‘L’ icon for a (temporary lasting) longer range Laser weapon…

(yes i know my gfx suck hehe 🙂
ps. Malban, do you have any ideas or thoughts forming yourself? – eg. certain features or ideas you wish to explore, or certain things you are not particularly keen to do? 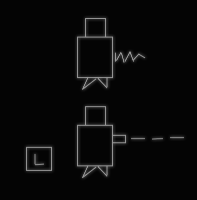 My feeling is – the vectrex is an old system which will not be played “extensivly” – not like it would have been played in its heydays.

What I mean by that is, that IMHO the game should be designed to be able to be “quickly” accessable/playable, easy to get into and not to have over complicated puzzles to solve or pixel exact movements necessary to solve something.

My first VCS 2600 game was Pacman. That game, seen from todays point of view, was really bad. But at that time I didn’t know the arcade version and for several months this game was the only video game I had. I played in probably every day for weeks and months.

Even with an exceptional well done “retro” game – NOBODY will invest that kind of time into a vectrex game nowadays. Lets face it the vectrex is more about collecting than playing (for some few of us more about programming than playing). But I think there are VERY few in the vectrex community where the favourite thing about vectrex is playing the thing (let alone playing new games).

Personally if I dig out my vectrex I want to have some minutes of fun – and than go on with my “non retro” life. These “minutes” can extend into hours though if there is some kind of “just one other try” involved. 😉

A game where I have to locate things, carry them back (in fear of losing the item), and then look for the next… sounds sort of tedious – I don’t know if that is a game that I would like to play repeately.

The jump and runs I personally have the fondest memories of are (in that order):

For me these games had high replay value, were fast and not to difficult. Still even after many games – one could discover new ways to play or find hidden features/levels.

The games I didn’t really like were these “Monty Mole”/”Jet Set Willy” kind of games. For me those were to “slow” to “nifty”… I don’t know how to put it into the right words.

If it were me alone I would implement a game “like” the above with a vectrex theme, or in vectrex style – without doing a clone. Have some cool own ideas… and that would be it.

The third level we have to exchange the PSG (terribly noisy)…

That packaged into a jump an run environment…