While the brainstorm deadline is already passed (30th of June)… I got some ideas in my mail.

The last week (although I wanted to) I have not been able to do further programming on “Jumper”. Several things came up – even some Vide programming. So while I have ideas for enhancements (or anew engine) programming is for now on the backburner :-(…

Here a letter from Jacek:

Good to see you are already working on the engine! Didn’t have time to try it myself yet.
I had a little idea I would like your opinion on before I put more time into it.
First of I keep thinking about this irritating video clip from Gigi D’agostino:
https://www.youtube.com/watch?v=Hrph2EW9VjY
I like the walking animation and the fact that it is just an outline. Also the fact that where a foot touches the ground, they sort of melt together and there is no more separating line between foot and ground.
I wonder if this would possible for our game?

I had some ideas for a possible protagonist and made some quick and dirty sketches (see attachment)
It’s Vector Boy or Hans Vector or …
Like the Vectrex he is the only one of his kind. He is made of Vector! In a hostile bitmap environment he is trying to survive. He can shoot a vector lazer beam which turns the pixel villains into friendly vectorized objects. But the same applies when our vector hero is hit or touches a bitmap bully; he turns slowly but surely, bit by bit into a motionless pile of pixel.

I don’t know if this would be possible but it seemed cool to me.
Let me know what you guys think. 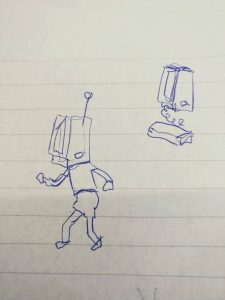 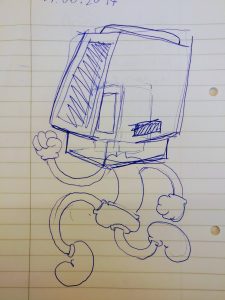 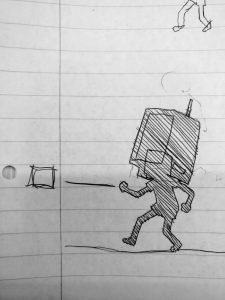 Yep I am totally with you on that (although your sketches are profounly non outlined :-)).

A year ago I did some sort of outline running man:

While I think that would be totally cool to pull of – for the kind of game environment I am thinking of this would be really hard to program. Doing a jump and run in a “scrolling” “Mario kind” of fassion – one would need to be able to change all “tiles” while playing in order to “melt”. Unless we do some other kind of game I don’t think that will be possible.

A game where that might be feasible could be some kind of “endless runner”.

I very much like the vector environment hero. I think we should go further in this direction a “vectrex hero” kind of thing.

I am a bit sceptical about the “hostile bitmap environment” kind of thing though. That sounds like there should be much bitmap graphics involved. Honestly – I don’t like bitmap graphics on the vectrex very much.

For some effects this is nice and usefull – but I wouldn’t want to build a whole game arround it.

Another enemy could Fitz Flicker or Duffy Drifter…